Twist!!  Just something about this wonderful dog, so very special & I absolutely adore him!!

Very much a sweetheart, a true gent with the most wonderful temperament & personality, an absolute pleasure to live with.  Twist loves to come for his cuddles & either sits in a lovely present position or glues himself to my side.

Twist is now semi-retired from the show ring due to my health problems.  As he's now in Veteran, when he does come out he's expertly handled by Nick Grosvener.

Twist is producing wonderful puppies that are excelling & winning in obedience, agility, flyball, heelwork to music & the show ring.  I couldn't be more proud of all of his progeny.

Twist made an absolutely fabulous start to his show career in 2006 with several 1st places at Champ shows along with Best Puppy Dog, Best Puppy In Breed & then the ultimate, BCC of GB Puppy of the Year 2006!!  Twist also qualified for Crufts 2007 where he was awarded VHC in a large Special Junior Dog class.

At Twist's first show of 2007, Midland Border Collie Club Champ Show, also his first Junior class, out of an entry of 13, Twist won Junior Dog followed by Novice Dog.  A great start to the New Year!  This means that Twist is now qualified for Crufts 2008.

I am so very proud of Twist.  Every bit the showman, 2007 proved to be another very successful year, never out of the cards & several first places.  At Leeds Twist had to be put up into Post Graduate due to his litter brother Troy (B. Classic Story) being in the Yearling class (Troy qualified for Crufts 2008!).  I was a little nervous being up with much older dogs but I needn't have worried, Twist held his own, showed his paws off & came away with 1st place!! The 2 photo's above taken at Southern Counties 2007; Twist was just 18 months old. Twist winning Puppy of the Year with judge Marion Hopkinson.
(Twist was more interested in going off to play with the girls than standing for his photo!!) 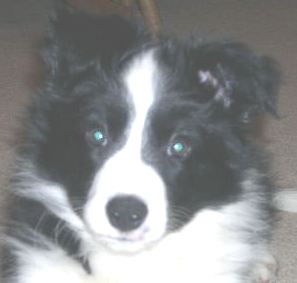 Twist pictured above at 10 weeks