Abbie, Abbie, Abbie!!  She is my funny girl!  Always up for a game of ball, once you start that's it, you'll be there all day!  Abbie loves to please & is often called my little dancing queen as she dances about!  Born in a litter of just 2 puppies from my beloved Emma, Abbie is my first homebred bitch & one who I absolutely & utterly adore.

Abbie has had a very successful show career to date.  As a puppy she was never out of the cards with many 1st places at both Champ & Open shows along with Best Puppy Bitch at the Welsh Kennel Club Show plus other Best Puppy awards.  Qualifying for Puppy of the Year & Crufts.

After a wonderful class win at Southern Counties in June 05, Abbie then had the most spectacular junior moult I've ever seen so had a rest for a few months whilst waiting for a new coat to grow.  As this was a bit slow & winter was approaching, I made the decision to let Abbie have her first litter & after lots of careful consideration she was mated to Laurie & they gave us a wonderful litter of 7 puppies where I really was spoilt for choice but in the end kept the wonderful Twist . To see photo's of Abbie's first litter, please click here.

In July 06 Abbie made her comeback to the show ring & what a wonderful summer season she had, almost always in the cards with 1st & 2nd places at Champ shows.  Abbie qualified for Crufts 2007 but a lack of coat meant she had to stay home!

Abbie is now qualified for Crufts 2008, fingers crossed for 3rd time lucky & she has her coat!!

STOP PRESS!!  At South Wales Kennel Association Championship Show on 8 July 2007, under breed specialist Sue Large, Abbie's first time up in Limit Bitch, Abbie was awarded 1st place out of an entry of 20 thus gaining her Stud Book number & qualifying her for Crufts for life!! 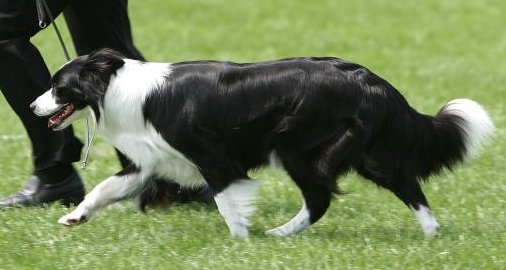 Abbie on the move at Southern Counties 2007